At dawn, Regent’s Park and the Kenyan savannah have more in common than you’d think.

Up in the not-night light, black coffee to heat the bones. The sun’s slipping into the sky by the time you arrive on the grassy plain, blue blearily turning to yellow above. The cold wet ground yields to trainer-clad feet and tyres. Dove voices flute and trill from the trees.

It’s the time for crepuscular creatures, crepuscular behaviour. Before the temperature and the flies rise with the sun, or the daily migration begins of toddlers and tourists and couples and buggies, a myriad that all share the same slow-walking gene. Before the herds of footballers roll in, a clash of boots and shouts and referee whistles. The tarmac and the hippo paths are clear. Run, drive, find, eat. A jackal silvering through the long grass. A retriever snuffling the ground. Impala clacking horns together. The puffing of a jogger.

There is a peace, thick enough to close back over the trundling growl of a jeep or the call of Hercules! from a Russian expat to their small brown spaniel. But thin enough to shatter when a carnivore unsheathes from the grass or someone comes up behind, just too loud, just too close. There is danger in the spaces that all share, all may enter. Only in a jeep are you invisible; and all it takes to become meat is to step off.

So don’t step off. Keep running. Swivel your ears. Raise your head. Keep close to each other, if you’re one of the four-legged grazing lot. For the herbivores, this is life; for the domestic dogs, luxury. Friends are made in a bundle of barking and tail-swishing and arse-sniffing, then forgotten. Jeeps are comfortable with their own kind, too, in a less exuberant fashion; they pause by each other, the drivers swap the traffic news (eland and elephant to the north, watch out for the lone male buffalo by the west river crossing), then pass on. The joggers do the least. At best, a nod or a smile of you’ve-discovered-the-secret-too, but most of the time, they’re too lost in music or fatigue or the knots of their own thoughts. Or just plain unsociable.

But there are rewards for keeping your eyes open. The snake of a leopard down a tree. A hippo who set his alarm clock wrong, naked in the rising sun. If you’re quite lucky, a BBC newsreader pausing for a breather. And if you’re very lucky, a film star venturing from down from the hinterland of Primrose Hill. Just don’t look at them directly, or you’ll spook them.

Everything follows paths. Joggers are particular creatures of habit (so it’s for the best that there aren’t actually leopards and lions in the Park, since being predictable means being edible). And there’s a particular path that goes past the zoo, where the edges between park and savannah are tugged together the closest. Off the road, over the water, and to the left: warthogs. When it’s cold in London – and it usually is – there’s neither hide nor hair of them. Their wild fellows can’t afford to be so fussy, out in the open on their knees as they root the ground. But they have the freedom, at least, to dig their burrows, to run with car aerial-tails resplendent and conga lines of babies after them.

The Park’s okapi are far truer to their nature. You never see them.

Onwards along the path. Penguins, petting zoo, camels, all as incongruous as the parakeets kissing to each other in the sweet chestnut trees and the Maasai cows that nod across the grassland, little more than skin hanging off clothes-hanger bones. They belong, and they do not. Or do they?

The gates back to civilisation approach. Dawn is wearing off. The sun is higher, yet the light is duller. The day has become everyone’s. The secret time is gone, like a mountain under growing cloud. 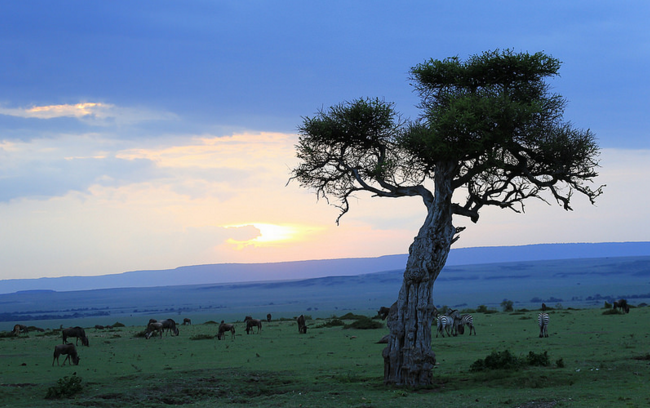 One thought on “This Strange Dawn (fanciful essay)”