When you spend ten years imagining something, odds are, the reality can only disappoint. When I finally headed up north for the Arvon residential writing course that I’d wanted to go on since I was seventeen, my future self was already scribbling away in workshops, bonding with fellow Young Adult writers, tucking herself into a corner of the garden with laptop and cup of tea, and walking the moors to stretch her limbs and unknot her mind. And when she left, the fire of her creativity would be burning brighter than ever.

While the ratio of writing to walking ended up a little skewed, the romance really did come true.

I arrived to northern cold, tea cake, and air so fresh and wild you could get drunk on it. Lumb Bank cottage, once the home of Ted Hughes and Sylvia Plath (both buried in Heptonstall, the village a few minutes’ walk away). It perched on the side of a small valley, a skirt of fields below the garden and trees everywhere else. The river hidden at the bottom whispered away, and for the whole week I would keep my window open at night to hear it. 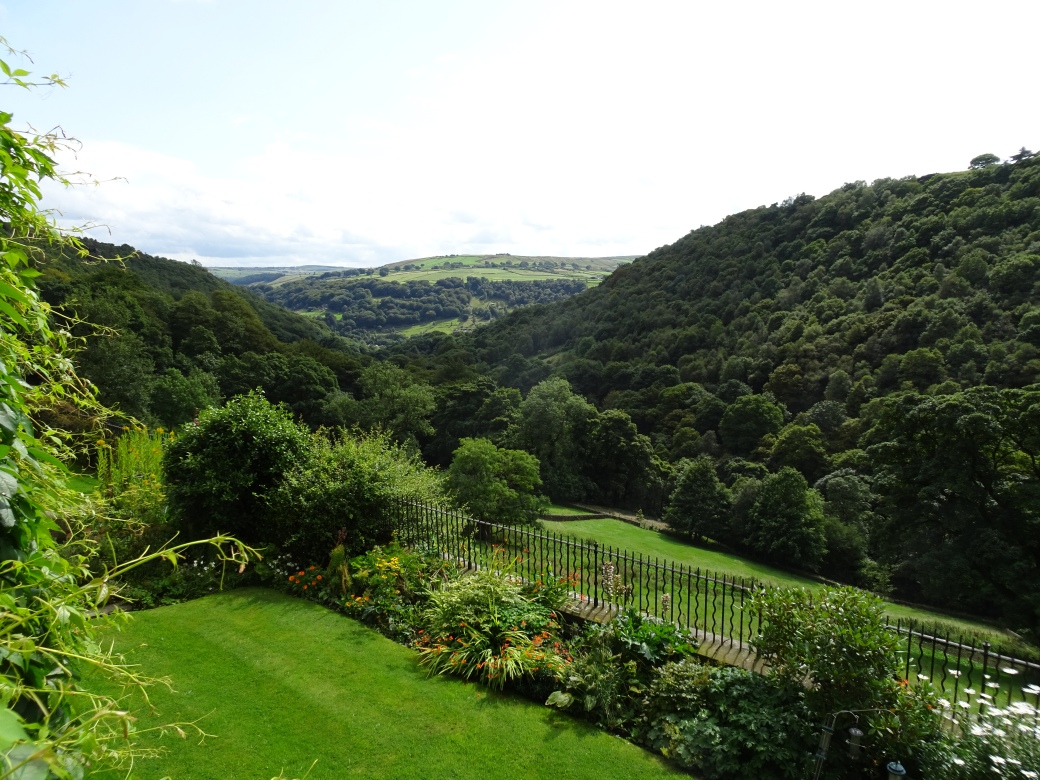 The view from my window

The course itself ran for four days (not enough, never enough). Mornings were structured, with our two authors for the week each leading a workshop. We sat at the long dining room table and played. Focusing on different elements of storytelling – characterisation, allusion, plot – we created new people and new conflicts or, for those of us working on novels at the moment, placed the characters we already knew from these in new situations, asked them new questions. I often struggle with free writing, somewhat pathetically – faced with an empty page and a prompt like a photograph or a few words, I stare with my hand paralysed. On the first day, I felt that what little I wrote wasn’t worth the breath of reading it out loud to the group. But I’d warmed up by the next.

When I wasn’t in workshops or working on my novel, I walked. An hour or so before breakfast, then for longer in the afternoon. Yorkshire is elemental in a way that the South East could never be. The land heaves in great breaths. Woods well in the clefts like blood filling gashes and the rocks, the rocks break from the soil like bones through skin. The moors themselves unsettle me, a majesty to their bareness that is really only scar tissue from the endless assault of Man and Sheep.

It is, in short, a place that tempts me into prose as purple as the heather. 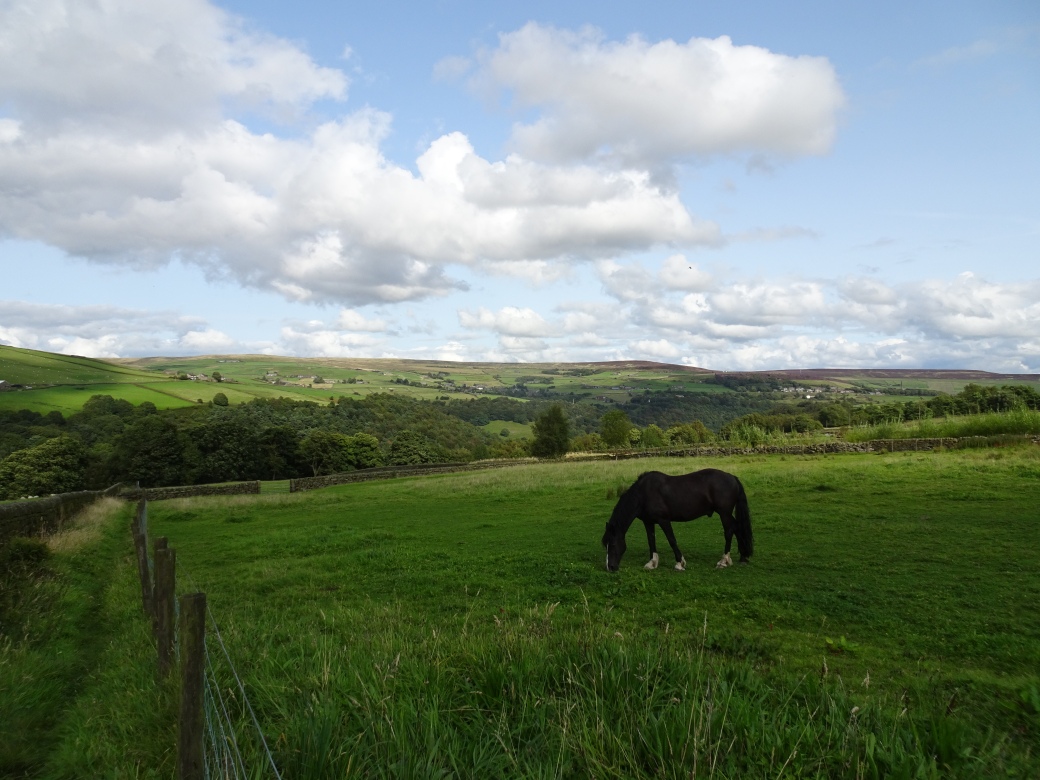 I felt free. I’d pick a direction from the map on the wall at Lumb Bank and then ramble along paths as they presented themselves to me. Many were overgrown, seemingly forgotten, and I came to think of my walks as a daily sacrifice of shin-skin to the Nettle God. Other paths were very generously interpreted by their yellow arrows, designed for deer and mountain goats, not people. I had fun scrambling up and down tumbles of rock and darting along thin shelves, while being aware that one bad slip could end in broken bones or worse. After close shaves, I’d tell myself to slow down, but feeling strong and quick is intoxicating. Because of my degenerative joint condition, I don’t know how much longer I have left to feel like this. Hills, my love, my enemy, have become more painful over the last half year. No wonder that Cas, the protagonist of my current novel, can run and fly.

Ah, yes, the novel. My whole reason for going. It was only a few thousand words when I booked the course. The writing of it has been slower than it was for my previous ones, thanks to a bruised and battered self-belief. When you bleed your soul for four novels that all get rejected by agents, it’s inevitable.

On Arvon courses, the authors both read a sample of your work and give you one-on-one feedback. I do wonder if our pair discussed and agreed on a bad-cop-good-cop approach, based on my and others’ experience. The first author focused on my opening chapter’s lack of a “question” – the conflict that must be resolved one way or another by the end, that must be answered. She was right, of course. I’ve read plenty about character arcs and set-ups and yet I was still on the fence about would be Cas’s driving force. So, I rewrote much of the first chapter before the second author saw it. And it was he who gave me my massive shot of confidence. He felt that my prose itself is at publishing level, and the premise of my book sounds exciting and original. His one concern was the need to make sure the scenes set on Earth were as interesting as those set on–

It feels like a piece of me is still in Yorkshire. Wandering along those rocky rivers flowing as dark as tea. Listening to tawny owls cry to each other at dawn. Catching a russet glimpse of a roe buck. Breathing in that wild air. 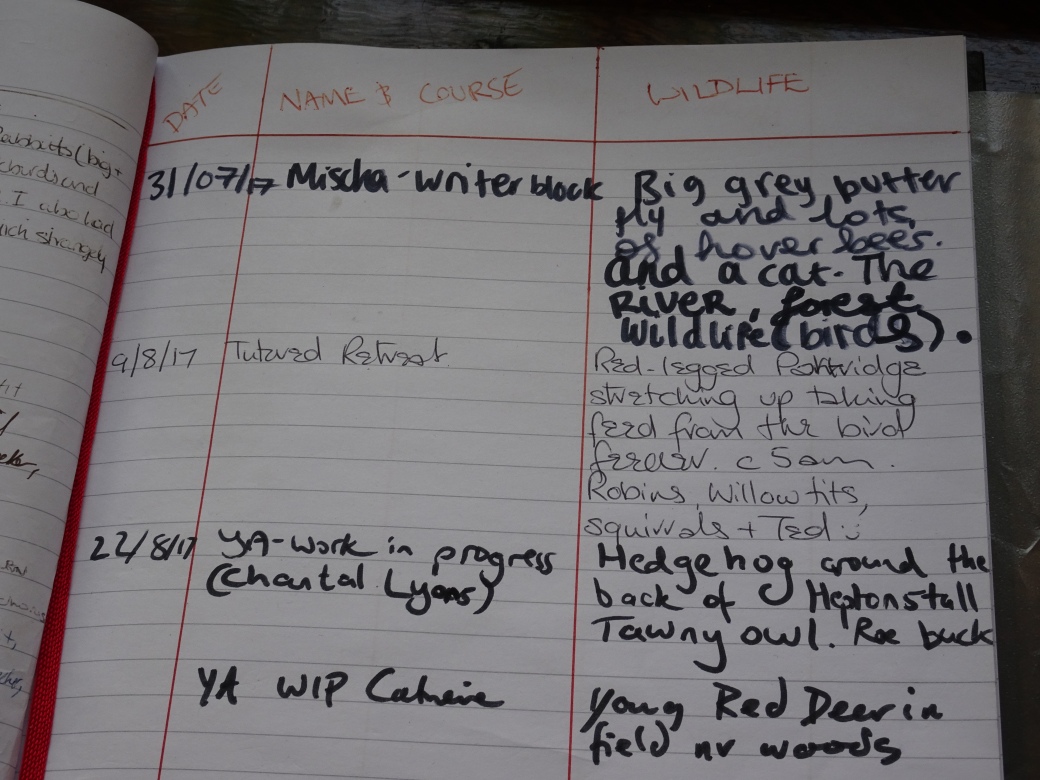 One thought on “A romance of writing in West Yorkshire”